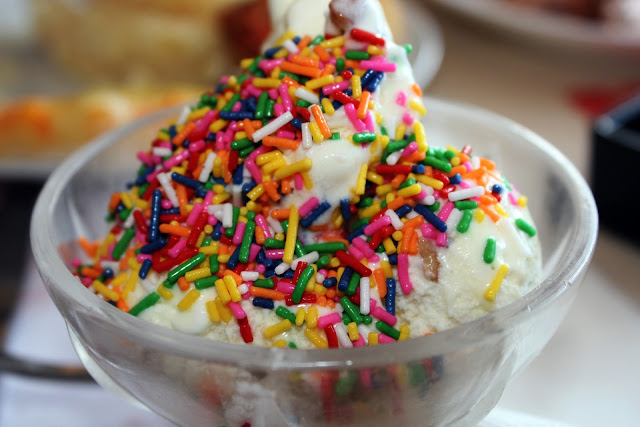 I haven't had any more ice cream at all this month. Funny how laws work in my mind. The coffee I did really well with, but after about a week I super stressed and started hitting another half cup, and now I'm back to two. The 2 servings of veg per day has been a joke. I'm too tired to even make a salad, it's all in the fridge getting gross. I did manage to get some servings sprinkled around over the last 20 days, but honestly, I'm doing worse than usual with veg.

The severe fibro flare continues. My rib cage (costochondritis) is so bad that I'm now officially dx'd shortness of breath by pulmonologist. No asthma, no COPD, just literally unable to spread my ribcage enough to max to full lung volume, and no control forcing it out since my entire rib cage is a giant charley horse.

I've gone through some dandy flare ups but this summer is taking the cake.

I decided not to let that stop me. I'm at least able to pull 67%-80% breathing function on a standard PFT in allergist's office depending on which allergy season we're in, and I know kids with CF handle a lot lower than that, so as long as my O2 is in the 90 percents, I'm ok.

Massage kinda helped for a very short while, but I think going for rigorous deep tissue might've been a mistake. I may go for lighter next time. Trying to force muscles to respond and comply can backfire, and it sure did this last time, felt kind fluish for a few days. I'm too tired to handle more of that. I just need a half hour of someone being nice to my back this week, give my shoulder blade a nice Thinking of You card and maybe say howdy to the ribs and chat a little bit about whatever.

Other than some other very stiff joints that I have to warm up and stretch a little every day, I seem to be in good shape. I'm keeping up really well with the major parts of the housework, picking kiddo up from school, kinda getting supper fairly regularly.

rules and laws, or, What did I change today?

I've written before in past blogs about the one step forward, two steps back feeling. Working so hard to gain a few inches, or even microns, and then stepping up for others and losing all that. In fact, watching yourself slide back past yourself and off a bit of a cliff.

I had one vicoprofen left from last year's double surgery (knee, wrist). I just took it.

I had a pretty good wellness check, considering some past history, but there was substantial fail in a couple of areas. I'm obviously controlling my diabetes pretty well on paper, but I'm also obviously overwhelmed with enough stressors to chuck my entire 5 year Plan out the window and just let the lipids take over. I mean, it's not horrible, 205 total cholesterol is pretty good for me when you look at my entire history, and I'm actually pretty proud of finally nailing my triglycerides down to absolutely normal, but now it's time to nitpick over my coffee creamer kind of stuff.

8 1/2 years ago I was freefalling after my old doctor had abandoned her practice months before, and I finally very gratefully crawled into another doctor's office in another town after the clinic mailed out a list of who would take over her patients. I was all but crippled, miserable, barely handling my life at all, and the new doctor had me turned around in 5 months flat. He got me off my old inhaler, diagnosed what the previous doctor neglected, rigorously oversaw med changes and reductions, and my life changed almost like magic. It wasn't magic, of course, and it was very hard, actually. Grueling.

That pill was nice. It wearing off in the middle of the night wasn't. Oh, well.

Part of my original strategy, when I decided to change my life, was very slowly applying new 'rules' and 'laws' to my life. Like, making my bed. During my worst couple of years, I just never made my bed. One day I decided if I do nothing else, I will make my bed look nice right after I get up. That is such a habit nowadays that I never miss doing it, and it's done without even thinking about it. Takes about 10 seconds.

And then I'd add another thing the next week. Something easy, simple, and taking very little time. Step by step over time, I have developed several areas of my house that stay fairly picked up and even clean.

So even though I feel like a big part of my life has backslid, several areas are really holding their own integrity fairly well, thank goodness. However, I really need to get back on the track I was doing so well on before we got house bombed with kiddo and mama moving in (which I actually enjoy, it's nice having people around on my worst depression days), so I've decided I've gotta get back on some new rules and laws.

This week I had a wellness check with my doctor, and even though I'm 6 pounds down from last wellness check and my blood pressure and glucose and especially A1C are better, I'm still obviously slipping. I'm not sure how many years it's been since my last wellness check, but in 2011 when this doctor turned me around, I lost 50 pounds and my glucose went even lower into the 90s. Since I'm creeping back up from that (again, even though it looks like I'm better than last wellness), my doctor is getting firm again with me about diet and exercise. I'm working on a more comprehensive health history on my spaz blog, hopefully out in the next few days (it's massively boring, lol), but short story is I am sliding back into diabetes if I don't stop this now.

And diabetes makes everything else harder by default.

So my new Law to kickstart this back on track thing (laws are such a huge thing with me that I never break them once I think of them as Laws, kinda like how I've never cheated in Monopoly), is
Only One Pint of Ice Cream Per Month.
Ice cream has become a very weak spot this summer, a major fail area.

And two rules (rules are breakable once in awhile) is only one cup of coffee a day (I go through this constantly, but my creamer is a problem, and I'd rather cut coffee than cut creamer), and 2 or more servings of vegetables a day the rest of August. I have been slacking off down to 1 a day, if that, and even though I'm fairly consistent because I love brussels sprouts 3-4 times a week, I'm filling up the rest of the void with ice cream and caving to a cookie here and there. It's really hard not to do that with extra people around and packages of cookies and cupcakes all around me. My doctor, who is about my age, totally validated me by responding that people half our age have no clue how much older people handle, since we are twice their age with half the energy and three times the daily pain still handling all the same stuff.

YES! My doctor totally gets how hard this is.

So I have one new Law and two new Rules for August. One pint of ice cream a month, 1 cup of coffee a day, and at least two servings of veg per day.

And then I asked myself, apparently during the worst depression week of the entire summer, What do I want, and How badly do I want it, and What am I willing to do to get what I want?

I want my house back. At least the parts I have designated as 'mine'. I have a scant 2 feet of counter space in the kitchen I don't let anyone else put anything on, and that is my 'desk'. I keep a planner there, my shopping list, my meds, and incoming mail. It is my organization center. It had become very piled up again with me quickly shoving my own things over from other areas to make room for other people for various reasons on the kitchen table where I still try once in awhile to bring my laptop. Today I got that counter space cleaned off again. I have my organization center back.

Maybe every week or two I'll ask myself those questions again.

We made it through the big double birthday week last month, made it through mama's big surgery last week (sinus, hope I never ever go through that 😖), and now we're doing a 4-day weekend with kiddo between summer school and regular school.

I haven't been saying much, but I'm in my worst fibro flare all year, and everything is very hard 24/7 for days and days, and I'm still keeping up better than I have in years past. It's very important to be able to be part of my family's lives, so back to the rules and laws before I backslide and forfeit what I've managed to regain over the last 8 years.